Welcome to the Logan's Run Wiki

An Encyclopedia of Logan's Run Sagas

Logan's Run is a science fiction story set in an ageistic dystopian society of the future. The story centers on Logan, a sandman, who is an elite member of a police force who hunts down and terminates runners. Citizen's live worry free lives of luxary and pleasure, until their lastday. On their last day they must voluntarily participate in their own euthanasia or they can run. This is story of Logan facing the prospect of his own last day, and becoming a runner himself.

The 1976 feature film directed by Michael Anderson and produced by David Saul, based on story by William F Nolan and George Clayton Johnson. 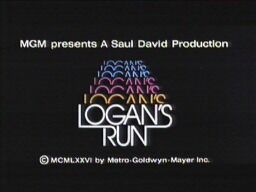 The 1977 television series is a spin off from the movie. In the year 2319, much of Earth's civilization has been wiped out and now survives in small isolated societies. In the City of Domes, citizens live idyllic lives until they turn 30 and are lead to Carousel for renewal, but instead are killed. Sandman Logan 5 dares to question the ruling order. With the help of Jessica 6 he escapes to the outside world. Now Logan, Jessica and their android companion Rem are on a desperate quest for the fabled Sanctuary, with an elite police force pursuing them.

In the film, the world of 2018 is a global corporate state, containing entities such as the Energy Corporation, a global energy monopoly based in Houston which deals with nominally-peer corporations controlling access to all transport, luxury, housing, communication, and food on a global basis.

The film's title is the name of a violent, globally popular sport around which the events of the film take place. It is similar to Roller Derby in that two teams clad in body armor skate on roller skates (some instead ride on motorcycles) around a banked, circular track. There, however, the similarity ends. The object of the game is to score points by the offensive team (the team in possession of the ball) throwing a softball-sized steel ball into the goal, which is a magnetic, cone-shaped area inset into the wall of the arena. The team without possession of the ball is defensive and acts to prevent scoring. It is a full-contact sport in which players have considerable leeway to attack opposing players in order to take or maintain possession of the ball and to score points (in the overpopulated world of the original short story, the object of the game is to kill off the other players). In addition, each team has three players who ride motorcycles to which teammates can latch on and be towed. The player in possession of the ball must hold it in plain view at all times.

Rollerball teams, named after the cities in which they are based, are owned by the various global corporations. Energy Corporation sponsors the Houston team. The game is a substitute for all current team sports and for warfare. While its ostensible purpose is entertainment, Mr. Bartholomew, a high-level executive of the Energy Corporation, describes it as a sport designed to show the futility of individual effort.

In 2022, with 40 million people in New York City alone, housing is dilapidated and overcrowded; homeless people fill the streets and food is scarce; and most of the population survives on rations produced by the Soylent Corporation, whereof the newest product is Soylent Green, a green wafer advertised to contain "high-energy plankton", more nutritious and palatable than its predecessors "Red" and "Yellow", but in short supply. New York City Police Department detective Robert Thorn lives with his aged friend Solomon "Sol" Roth, a former scholar who helps Thorn's investigations. While investigating the murder of William R. Simonson, a director of the Soylent Corporation, Thorn questions Shirl, a concubine (referred to as "furniture"), and Tab Fielding, Simonson's bodyguard, who, when the murder took place, was escorting Shirl to a store selling meat "under the counter" for Simonson. Thorn later gives Roth the Soylent Oceanographic Survey Report, 2015 to 2019 found in Simonson's apartment. At the police station, Thorn tells his lieutenant (Hatcher) that he suspects an assassination: nothing was stolen from the apartment, its sophisticated alarm and security cameras failed to detect the intruder, and Simonson's bodyguard was conveniently absent. Continuing his investigation, Thorn visits Fielding's apartment and questions Fielding's concubine, Martha, helping himself to a teaspoon of strawberry jam, later identified by Roth as too great a luxury for the concubine of a bodyguard. Under questioning, Shirl reveals that Simonson became troubled in the days before his death. Thorn questions a Catholic priest Simonson had visited, but the priest at first fails to remember Simonson and is later unable to describe the confession. Fielding later murders the priest to silence him. New York Governor Joseph Santini, once Simonson's partner in a high-profile law firm, orders the investigation closed, but Thorn disobeys and the Soylent Corporation dispatches Simonson's murderer to kill Thorn. He tracks Thorn to a ration-distribution where police officers are providing security. When the Soylent Green there is exhausted and the crowd riots, the assassin tries to kill Thorn during the confusion, but is crushed by a riot-control vehicle. Roth takes Soylent's oceanographic reports to a like-minded group of researchers known as the Exchange, who agree that the oceans no longer produce the plankton from which Soylent Green is reputedly made, and conclude it is made from human remains. Unable to live with this discovery, Roth seeks assisted suicide at a government clinic. Thorn rushes to stop him, but arrives too late, and is thereafter mesmerized by the euthanasia's visual and auditory display of forests, wild animals, rivers, and ocean life now extinct. Under the influence of a lethal drug, Roth tells Thorn his discovery and begs him to expose the truth. To this end, Thorn stows himself aboard a garbage truck to the disposal-center, where he sees human corpses converted into Soylent Green. Returning to make his report, he is ambushed by Fielding and others; and having failed to summon his colleagues, converses with Shirl before connected to Hatcher. Thorn then retreats into a cathedral filled with homeless people, where he kills Fielding but is seriously injured. When the police arrive, Thorn urges Hatcher to spread the word that "Soylent Green is people!".

In a city of the future, sexual intercourse is outlawed and use of mind-altering drugs is mandatory. Narcotics are critical both in maintaining compliance among the city's residents and also for ensuring their ability to conduct dangerous and demanding tasks for long periods of time. The inhabitants worship a godlike being known as "OMM 0910", with whom they commune in telephone booth-like areas known as Unichapels. At their jobs, SEN 5241 and LUH 3417 keep surveillance on the city and field questions (mostly about proper drug intake). LUH has a male roommate, THX 1138. He works in a factory producing androids that function as police officers. The work is hazardous as it requires handling explosive and radioactive material. LUH becomes disillusioned and makes a conscious decision to break the law and stop taking her drugs. She subsequently secretly substitutes inactive pills for THX's medications. As the drug's effects wear off, THX finds himself experiencing authentic emotions and sexual desire for the first time. At first conflicted and nauseated, he eventually connects with LUH. Knowing that their relationship is illegal, THX must decide whether to return to using the prescribed drugs, or escape with LUH. He knows that he will not be able to function without his drugs while at his demanding job, but he does not want to lose what he has created with LUH. They consider an escape to the "superstructure," where they hope to be able to live in freedom. THX is confronted by SEN, who uses his position as LUH's superior to change her shift, admitting he wants THX as his new roommate. THX files a complaint against SEN for the illegal shift change. Without drugs in his system, THX falters during critical and hazardous phases of his job. The city's authorities discover THX's and LUH's crimes of sexual intercourse and drug evasion (because of a bureaucratic error, THX is briefly "mind-locked" while at a critical juncture of android construction, which almost leads to disaster). THX and LUH are arrested. THX is imprisoned in an area of the city that resembles a white limbo world. He enjoys a brief reunion with LUH—one disrupted by the enforcer robots. THX is consigned to another region of limbo, this one populated by a collection of other prisoners, including SEN. Knowing that THX filed the complaint against him, SEN nevertheless rallies him to join his undescribed cause.

Most of the prisoners seem uninterested in escape, but eventually THX and SEN decide to find an exit. They encounter SRT, who starred in the holograms broadcast across the city. SRT has become disenchanted with his role in the society and is making an attempt to escape. Exiting their prison, THX and SRT are separated from SEN. Controllers in the city learn of the escape and allot a strict budget (14,000 credits) for their recapture. Chased by the robots, THX and SRT find a computer center, from which THX learns that LUH has been "consumed", possibly for organ reclamation (since bodies discovered earlier had, as SRT put it, their "insides...gone") and her name reassigned to fetus 66691 in a growth chamber. This suggests that she has been declared "incurable" and killed. Alone and hunted, SEN makes a tentative exploration of the limits of the city's underground network. Cowed by what he sees, he finds his way to an area reserved for the monks of OMM. Alone, SEN prays directly to OMM before being confronted by a lone monk who notices that SEN has no identification badge. SEN attacks before the monk can report him. Returning to the city, SEN strikes up a conversation with children before police androids apprehend him. THX and SRT steal two cars, but SRT crashes into a concrete pillar, disabling his car. Pursued by two police androids on motorcycles, THX in his car flees to the limits of the city's underground road network. Abandoning the car, eventually THX locates a route to the surface. The police pursue THX up an escape ladder, but are ordered by central command to cease pursuit, mere steps away from capturing him, as the expense of his capture exceeds their pre-determined budget. It is then revealed that the entirety of the city whence THX came is all underground, as he stands before a large setting sun in a red sky, while birds intermittently fly overhead.

Photos and videos are a great way to add visuals to your wiki. Find videos about your topic by exploring Wikia's Video Library.