Man Out of Time

Man Out of Time

Man Out of Time is the fifth episode of the Logan's Run television series. It first aired 17 October 1977.

Our trio is in the Solarcraft traveling through a wooded area and watching a strange pattern on their screen. Rem notices it as a powerful electrical disturbance. They arrive at the ruins of a building. Obviously a laboratory of some sort. In the center of the ruins stands an hexagonal platform. Rem feels something coming and warns Logan and Jessica to cover their eyes. A red glow appears then is replaces by a probe. Rem is not sure where it is form. The three move closer to investigate. inside the probe is an animal. Jessica worries about it being dangerous, but Rem tells them it is a harmless bunny. Logan sets down his gun inside the probe and takes the bunny out of the cage. Jessica theorizes that it must belong to someone as it was in a cage. A camera pivots to watch out trio at the top of the probe. As Logan holds the bunny and Jessica moves in closer the probe vanishes.

Back in the past the prove arrives and the scientists all cheer and applaud. The scientists notice that the rabbit is gone. Dr. White finds Logan's flamegun. He yells for them to get the tapes processed. Another scientist removes a pack from the side of the camera. Dr. White tells someone to get Mr. Eakins at the sanctuary project (another building) on the phone.

Here we first meet Dr. David Eakins. Eakins is telling a subordinate to put everything into the computer. A woman answers the phone then calls David Eakins over to speak to Dr. White. He is extatic that the time probe worked. he announces to his staff that the time probe came back and that they are going ahead with the operation. He leaves Andy in charge reminding him to put everything into the computer. Andy is worried about Dr. Eakins not having anything to come back to. His afro look interesting with his glasses. I guess afros will be in for white men in the near future. The man behind Andy mentions that according to the projects the war should start any day now. As Dr. Eakins tells them that the information the put into the computers could make the difference and keep themselves from being blown to kingdom come a screen lights up reading things like "Crisis worsens" and "treaty rebuked". The computer predicts that the critical day will be December 25th 2778. Dr. Eakins now looks grim. "Merry Christmas! Only 12 more shopping days till Armageddon." David is in the Time Lab building watching the tapes from the probe's first mission. On the screen they watch Logan and Jessica play with the bunny while Rem looks on. David is confused by the fact that the building is in ruins. This confirms the scientists fear that the war is coming. The scientists notice that they have a high degree of technology from their clothing and the weapon which blasted a hole in the side of the ballistics lab when they tested it. Since they have such a high degree of technology they might have a concept of time travel. So it is important that Dr. Eakins not reveal the nature of his experiment to Logan and friends. Because if they can figure out what caused the war they could prevent it and civilization could continue, but theirs would never have existed. not a one of them would have ever been born.

David only has 22 hours to complete his mission. That is as long as they can keep the time portal open. David waits in the probe as they send him into the distant future. Back in the future the probe arrives again. Logan and Jessica are still playing with the bunny. They all stare at one another. David is astounded that the machine works. Logan ask him who he is. He introduces himself as David Eakins and then they have introductions all around. Rem is happy he is not called a robot by Eakins. Rem asks where he comes from and how he managed his appearance. Eakins tells them that he is from the 'western region' and that they are conducting experiments in long range matter transportation. Eakins gives the weapon back to Logan. Jessica asks Eakins if he has ever heard of Sanctuary. Eakins is surprised. Jessica explains that they looking for Sanctuary. Eakins tells them that he is too looking for sanctuary. Jessica tells him that they have a vehicle. Eakins is elated but all at once he is shot by a stun ray from an approaching Sandman. Logan dives for cover behind a fallen computer as two sandman on a nearby hill have them pinned down.

Jessica runs over to see if Eakins is Ok. Logan asks Rem to distract them to draw their fire. Logan circles around. Eakins wakes up. Jessica makes a quick explanation of Sandmen and that they are after Logan and her. Jessica peeks up to watch Logan running up the hill.

The Sandmen have not seen Logan. he runs down the hill hides behind a tree and picks them both off with stun rays. Logan grabs their guns tosses them in the grass and then blasts them. Logan arrives back at the group and announces that it was not Francis so the city bust be sending other teams after them now. Eakins is confused but Logan and Jessica help him to the Solarcraft. They drive off through the flattened ruins. Back at the time chamber the scientists watch the clock count down. It is night and the Solarcraft is slows to a stop. Eakins is upset about stopping. Eakins makes a few mistakes in what he is saying in front of Rem. Rem and Logan go off to have a stroll. Eakins asks Jessica how she knows about sanctuary. He asks her if she knows that sanctuary is. She does not know exactly, but she feels it is place where she can be free, grow old, and raise families. Eakins wonders what she will do if it is not what she expected it to be. Jessica says that they will keep looking because there must be a place out there somewhere where her and the other people from the city of domes can start over. Whatever caused the holocaust which ended the world now we will have a chance to start a whole new world. The next morning the Solarcraft arrives at a block in the road. Eakins hurry seems a mystery to the others. On the other side of the crevasse they come to a valley. Eakins says that this is where it should be. Logan is suspicious because Eakins said he had never seen it before. Eakins counters that he had seen holographs of it. Logan looks worried. Rem looks confused too and stays behind to ask Logan about Eakins. Logan points out that back in the city of domes runners would give off a feeling that you could almost touch before they ran. Logan feels there is something strange about Eakins. They walk down the hill and catch up with the others where they are met by an old man welcoming them Sanctuary. Anyone seeking truth and justice is welcome here. he introduces himself as lab Tech 1. Runners have not been here before. Lab tech one does not know about the City of Domes. Rem considers that sanctuary might mean different things to different people. Lab Tech 1 takes them to a village and introduces them to their leader Analog. He bids them welcome to Sanctuary. They seem to live in very short square buildings. Eakins asks to see the computers. Analog is confused by the word. Analog is named after a computer. Analog tells them that he is named after the great giver of truth. Rem buts in telling Eakins that his talk of computers seems to be wasted on these people. Logan seems to think that this is not the sanctuary he wants. Jessica is not so sure. Logan points out that this can't be the sanctuary they are looking for because they have never heard of Runners. Rem point out that they have not heard of much else either. A man come up crying the leaders name urgently and carrying a small child. the boy has been stunk by a scorpion. Rem tells Jessica about scorpions and their bites and that if he is treated quickly he can survive. Analog takes the boy to the temple. Logan Eakins and everyone follows along. Analog places the boy on an alter. he waves a book over the boys head several times. Then asks for divine intervention from truth so that they boy may be healed and continue the holy search for light and guidance. They all enter into a prayer.

The truth is my lantern.
The word is the spark.
The light is the answer
The end of the dark.
The sleeper awakens.
Let darkness beware.
Look on the face of truth and despair. 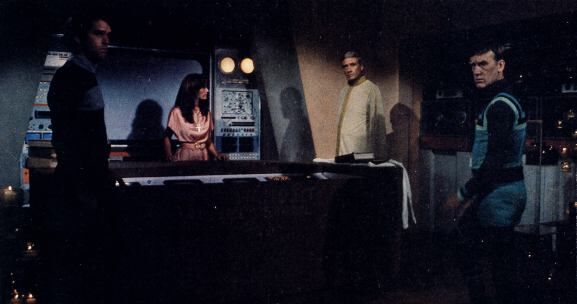 Eakins has to return soon. Everything is in the computers. Next time someone is sick they can have the knowledge to cure him. Rem has the tapes for Eakins. Eakins tells Analog that the battery will power the machine for one year, and by that time they will need to reconnect the original power lines. The machine will teach them how to read. Eakins asks Logan to drive him back. Outside Logan is sort of upset. He asks Eakins why bother to tell them this, because if he succeeds they will all cease to exist anyway. Eakins realizes that he may not be able to save the past, but he may be able to help these people in the future.

they arrive back at the ruins. They emerge form the Solarcraft. Rem hands him the tapes. Eakins asks if they speak to his personal future. Rem is elusive on this. Eakins is hesitant to go. Logan mentions that they did not figure out what started the holocaust. (although he may have been lying about this.) Rem tells him that he had returned to his own time. Eakins wonders if he should change history by not returning to his own time. perhaps that was the change he should make. Logan points out that he was not selected for this mission because he would complete it. Rem is seen shaking his head as Eakins walks away. Eakins enters the time probe and it vanishes.

Jessica notes that they are all still here. Rem did not think that he could succeed. The time probe suddenly returns. In it is a small video machine with a tape cartridge. The tape cartridge is of the 8 track variety. The set up the machine on a nearby piece of rubble. Rem thinks it will be of great interest to them.

Eakins appears on the screen talking to them form the past. Eakins has failed. A series of headlines follows. Eakins time travel success sparked the end. His success unraveled the world. You could travel back. That world leaders could be killed before they became important. The enemies decided on a first strike before the time machine could be used as a weapon. Eakins realizes that he does not belong in their time. he tells them not to give up and to keep looking for their sanctuary.

Jessica is very upset and wonders what now. Logan says they keep looking. Rem thinks that they owe Mr. Eakins their best effort. The Solarcraft takes them away from the time probe and the sad adventure they have just left behind them.