Logan's Run is a novel by William F Nolan and George Clayton Johnson. First published by Dial Press in 1967, it depicts a dystopic ageist society in which both population and the consumption of resources are maintained in equilibrium by requiring the death of citizens who reach a particular age. The story follows the actions of Logan, a Sandman charged with enforcing the rule, as he tracks down and kills citizens who "run" from society's lethal demand — only to end up "running" himself.

The Youth Rebellion Had Triumphed...The young long since had taken over the Earth. Sex, drugs, kicks were unlimited. But the trip from grove to grave was quick. No one was allowed to live past 21. Logan was a Sandman, one of the elite police who hunted those who refused to accept their fate. Then logan turned 21 - and suddenly he was desperately running, searching, in a world of cities beneath the sea, frozen arctic prison colonies, great hollowed-out mountains, abandoned cities... through a labyrinth of terror that lay between him and safety . . . between him and ultimate triumph...

The first book is far different from either of the other two books, or anything else for that matter, that followed it. The book featured the exploits of Logan, a sandman who worked in one of the many cities in the future. There were no domed cities, though many elements of the book wound themselves into the movie in one way or another. One of the stops on their many adventures is the frozen prison called Hell which is ruled over by a half-machine half-robot warden named Box. In the book Logan and Jessica are far more developed characters than they are on the screen (either big or small) following an underground railroad of mazecars and shady characters on a quest to get to Sanctuary, which ends up in a rocket ride from Florida.

The book makes for a wonderful read which is segmented into several parts. The book is also a lot more racy than you might think and has some wonderful writing that oozes off the page in a very unusual 60s style. With the youth 'revolution' just around the next corner this sort of prophetic novel must have sounded a lot more plausible back then. Also one rare book club version was printed without any of the racy, sexy parts in it!

The cover of the book changed several times before and during the release of the movie the cover featured Jessica in a tattered looking green dress. This was later changed in favor of a more revealing, and much taller, Jessica in a sparkling white dress. Shown above are the 1st and 10th Bantam printings. Also, some versions of the book have a sixteen-page color insert of photographs from the movie, while later Bantam printings did not. 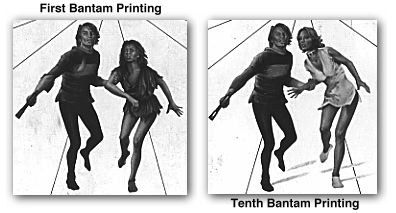